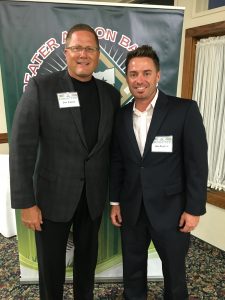 gratulations to Coaches Joe Lazor and Joe Inglett on being inducted into the Greater Akron Baseball Hall of Fame 2016 Class!

The GABHOF recognizes individuals who have contributed to area baseball organizations as players, coaches, umpires, managers, sponsors or boosters. The hall of fame gallery is located inside Canal Park in downtown Akron.

For more on all the inductees see http://www.gabhof.org